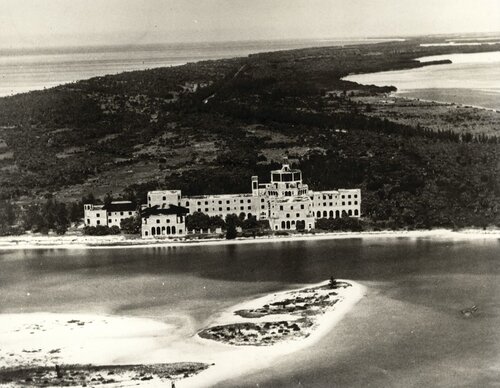 Longboat Key was the vacation land of the Timucuan and Caloosa Indians for hundreds of years. Shell mounds have been found showing that picnics and community fish fries were common occurrences on our secluded island. In 1539, Hernando DeSoto is thought to have visited here with his scout, Juan Anasco, manning the “longboat” as it went through the north pass.

Although little is known of his time here, the pirate Jean La Fitte was shipwrecked in 1821 on or near Longboat Key for several months.

In 1891, Civil War veteran Thomas Mann settled with his grown sons on the north end of Longboat Key and was awarded 144 acres of our paradise as a homestead grant. One of his sons also received an additional 144 acres on the southern end of the Key. Mann later sold his land around the turn of the century for a reported $500.

In the early 1900’s, homes began popping up on the north end of the island, some of which are still standing today. During the roaring 20’s, the famous John Ringling of The Ringling Brothers Circus bought hundreds of acres on the south end of Longboat Key and proceeded to plant Australian pine trees along what was known then as Ringling Boulevard; now Gulf of Mexico Drive. He also built the Ritz-Carlton Hotel on New Pass, which started in 1926 but never finished. The hotel was torn down in 1962 after Arvida bought the land. Ringling also left his stamp on our area by orchestrating our nearby outdoor shopping complex St. Armand’s Circle located just next door on Lido Key. Rumor has it Ringling won the land in a poker game, and designed the shopping district after his favorite European marketplace.

During World War II, Longboat Key was sparsely inhabited, but near the present Longboat Harbour the island proudly housed a target range for Army Air Force planes, which thunderously roared over the turquoise waters while firing 50-caliber bullets. During such target practices, gates blocked all passageway to Gulf of Mexico Drive, and once completed, the gates were opened again to allow the few vehicles to pass.

More recently, Longboat Key again made it’s mark in history as the location President George W. Bush was staying on Sept. 10, 2001, the night before the infamous Sept. 11th terrorist attacks. It is rumored he and his many associates were staying at The Colony Beach Resort on Longboat Key, and rushed back to formulate a plan within the walls of The Colony’s boardroom after news was received. For several years after, the Town of Longboat Key placed American flags the length of the bridge to The Colony on September 11th to commemorate Bush’s route. Today the town lines the entire island with flags on this and other commemorative days - but in the beginning it was a symbolic drive.

The Town of Longboat Key was incorporated on November 14, 1955. Development started gradually after that, but hit it’s peak in the 1960’s and 1970’s. Longboat Key Towers was the first condominium built on the island. With the increase in area popularity, the 1970’s brought a need for the Town Commission to gradually tighten the zoning and approve Town water and sewage. At the time, it was estimated that these utilities would serve a population of 26,000. Since then, development has exhausted almost every acre of land on our island. Today, very few tracts of privately-owned land over a few acres remain undeveloped - yet the island itself has a remote and serene presence. We can attribute our exclusive island and laid-back ambiance to the foresight of early habitats who saw Longboat Key for the beautiful paradise she beheld.

“Legend says that Longboat Key gets its name from longboats left by the Spaniards once they reached land.”

To commemorate the short, but interesting, history of Longboat Key the Town and the Longboat Key Historical Society have erected 7 historical markers showcasing the events that have shaped the history of our island.